June 15, 2016 – KGB and Russian Military steal Democrats’ Trump files – PBS – this is actually not unusual for Russia. They have a very aggressive competition between their intelligence agencies. They’re always trying to one-up one another, to look better in front of Putin, to get more budget, more power.

risks losing Senate – The Republican party has to be tough and smart,” he said. “If not, I’m gonna win but a lot of other people are not

May 5, 2016 — CBC’s Neil Macdonald predicts “Trump is the fuel, but Republican Party will burn itself down … Almost certainly, as the conservative columnist George F. Will predicts, a Trump nomination will create all sorts of ‘down-ballot carnage’: state, county and municipal Republicans will capsize in his bombastic wake … It will probably mean a generation in the wilderness, or maybe two, before conservatives reform and achieve national power again.”March 29, 2016 — Illinois Republican Senator breaks ranks  Mark Kirk becomes first Senate Republican to meet with Garland – Quinn Bowman

ate U.S. Supreme Court Judge Antonin Scalia, President Obama has come up with Judge Merrick Garland, a replacement of whom many powerful Republicans approve. Butto sycophant to Southern racists, the Republican Senate refuses to even consider any appointment Obama sends — them simply because it is America’s first Black President who sends it to them.  Under Article 2 of the U. S. Constitution Obama “shall nominate, and by and with the advice and consent of the Senate, shall appoint …  judges of the Supreme Court.”  In Canada our Supreme Court would force the Senate to give Judge Garland a timely and fair hearing (under a Writ of Mandamus). We suspect the Supreme Court of the United States would do the same thing. Whatever the result, to cowtow to their Southern “base”, the Republicans have again messed their Senate nest.

… every Republican member of the U.S. Congress sat on their hands —  the Republicans had set up a “SIT-ON-YOUR-HANDS” rule and their party whips, Fox News, right-wing radio fanatics and the people who legally bribed the Republican Congressmen  with “political contributions” enforced it — even House Speaker Paul Ryan wouldn’t clap. 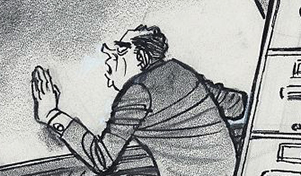 Meantime the Democratic Party has radicalized itself by taking up radical environmentalism of the light-minded Al Gore (poke a capitalist in the eye) variety.

No! No! No! The Bernie Sanders brand of left-wing Democrat is sure not the airy-fairy hot air Al Gore variety. Sanders is every bit as specific and hard-hitting as Donald Trump

March 31, 2016 – Republican Establishment Dead Against Equality – Paul Krugman, New York Times : “After all, what is the modern GOP? A simple model that accounts for just about everything you see is that it’s an engine designed to harness white resentment on behalf of higher incomes for the donor class.”

March 18, 2016 – Why President Obama Picked The ‘Only White Guy’ On His Shortlist – National Public Radio